The Border Leicester first came to the attention of the great showman Arthur George of
Llanidloes, who has recently passed away the age of 91, when he was an early enthusiast of
the Welsh Halfbred ewe. Since the 1960s he was a regular exhibitor of Welsh Halfbreds
throughout Wales and with great success at the Royal Welsh Show and Royal Welsh Winter
Fair. In 2013 Arthurs pair of Welsh Halfbred lambs won the Longwool Championship at the
Royal Welsh Winter Fair - the only time that Welsh Halfbreds have won this prestigious
award.
To breed his Halfbreds he needed Border Leicester rams.
Inevitably his interest in the Border Leicester led to the establishment of his own pedigree
flock and again the show ring beckoned with Arthur and Liz clocking up many successes. He
won the 2018 Royal Welsh with BL44W M7, a ewe already well known on the show circuit
throughout Wales and the English border counties before being retired at the top.
And in the Border Leicester sale ring too Arthur made his mark, especially with his females
at the Society sales at Builth Wells.
But it was not only through the shows and sales that Arthur promoted the Border Leicester
and Welsh Halfbred. Sheep, both pure and Halfbred, produced to show ring standards, were
provided for Society stands at NSA Events in Wales and at Malvern.
Asked what the pinnacle of his career with sheep would be Arthur would have told you that
meeting HM The Queen and introducing her to his Welsh Halfbreds at the opening of the
new Welshpool Market in November 2009 was pretty near the top.
Highly sociable and entertaining no-one will have missed the show season and its parties
more than Arthur this year and his presence holding court , latterly from his car, will be
remembered by many for a long time. 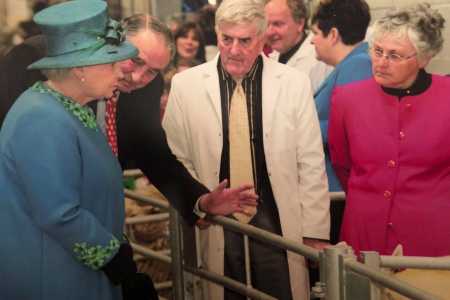